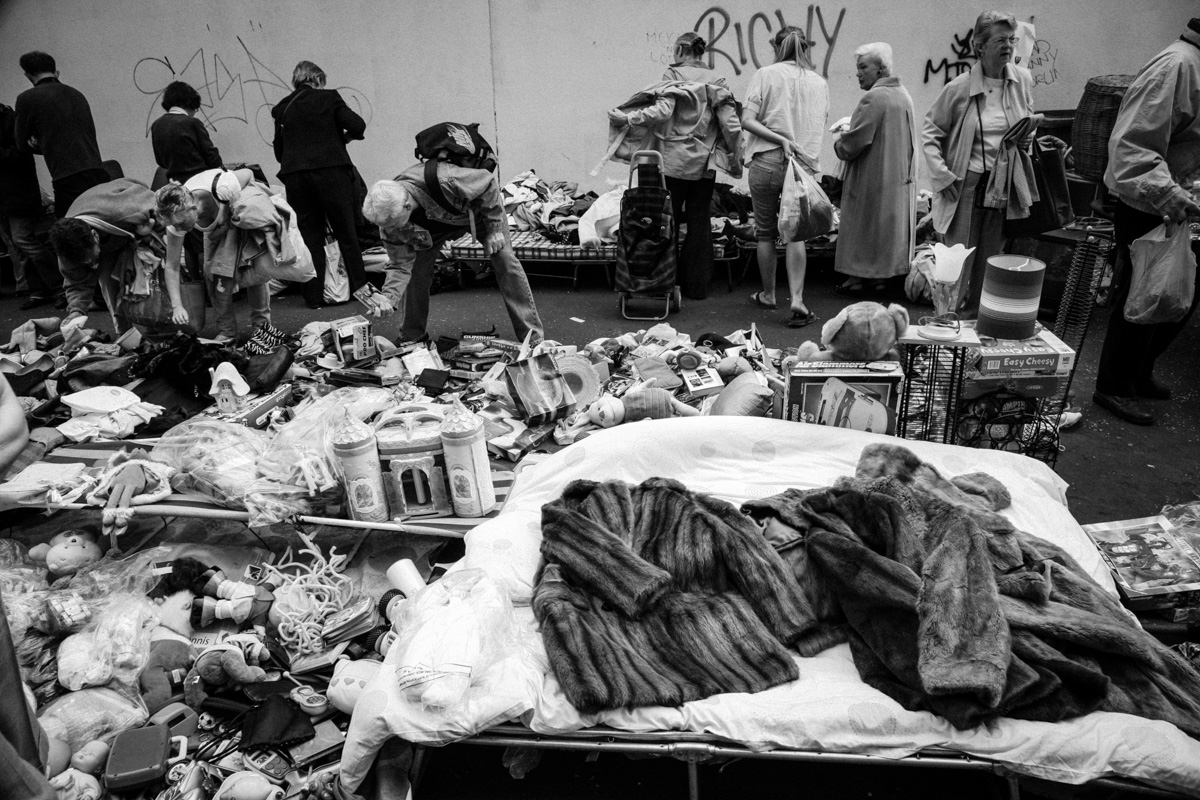 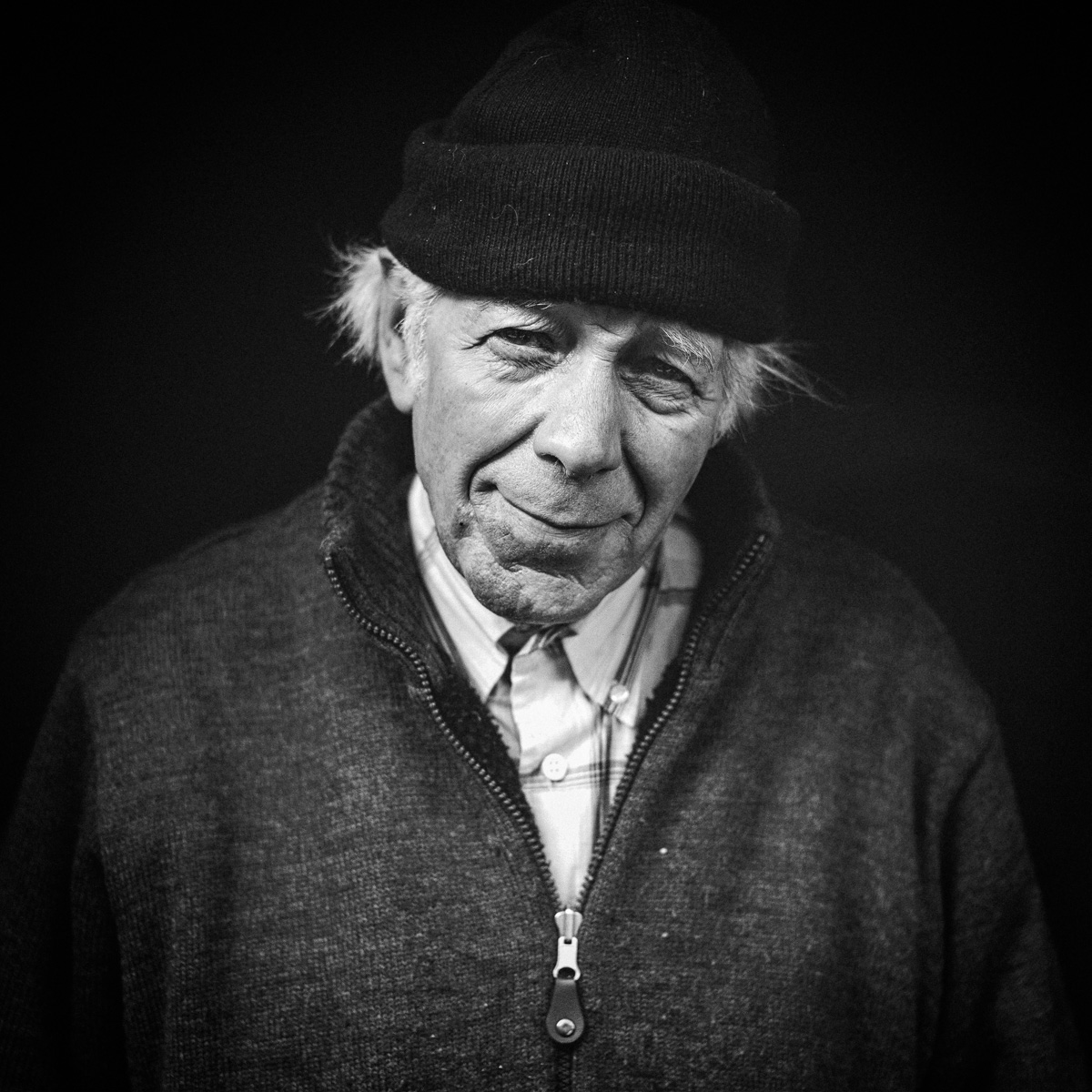 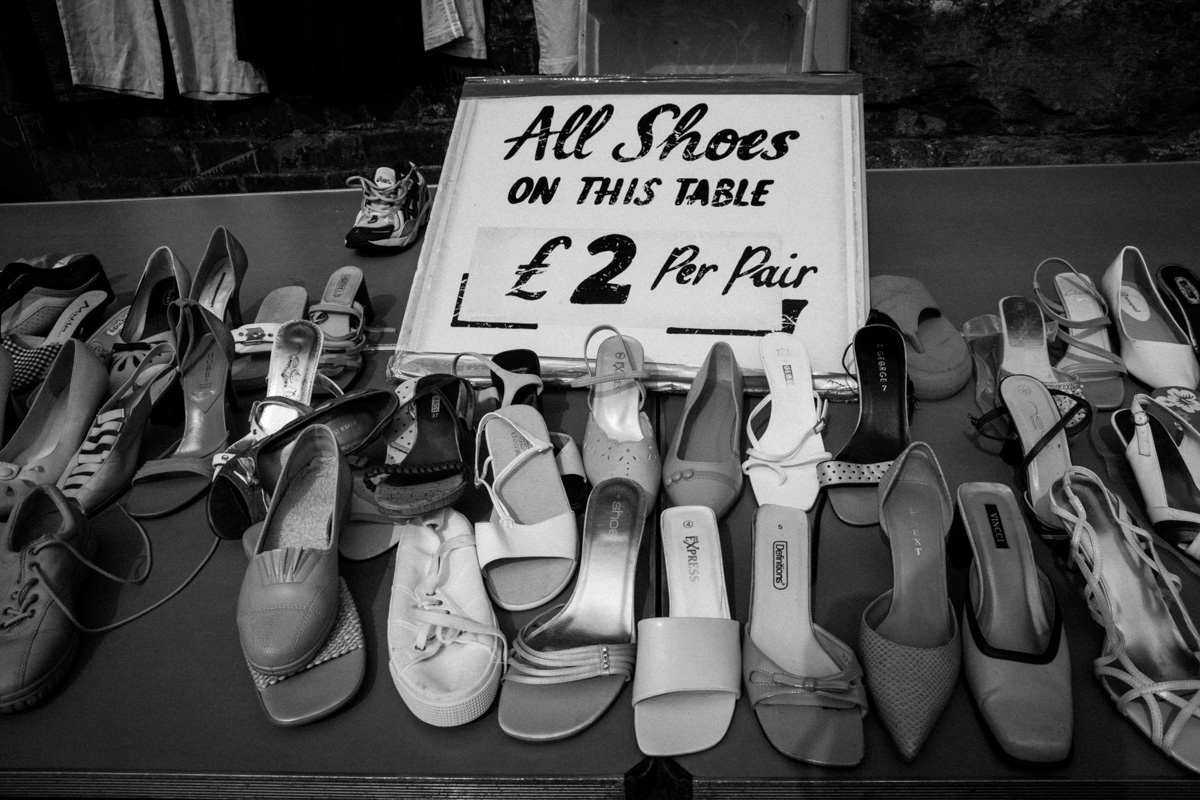 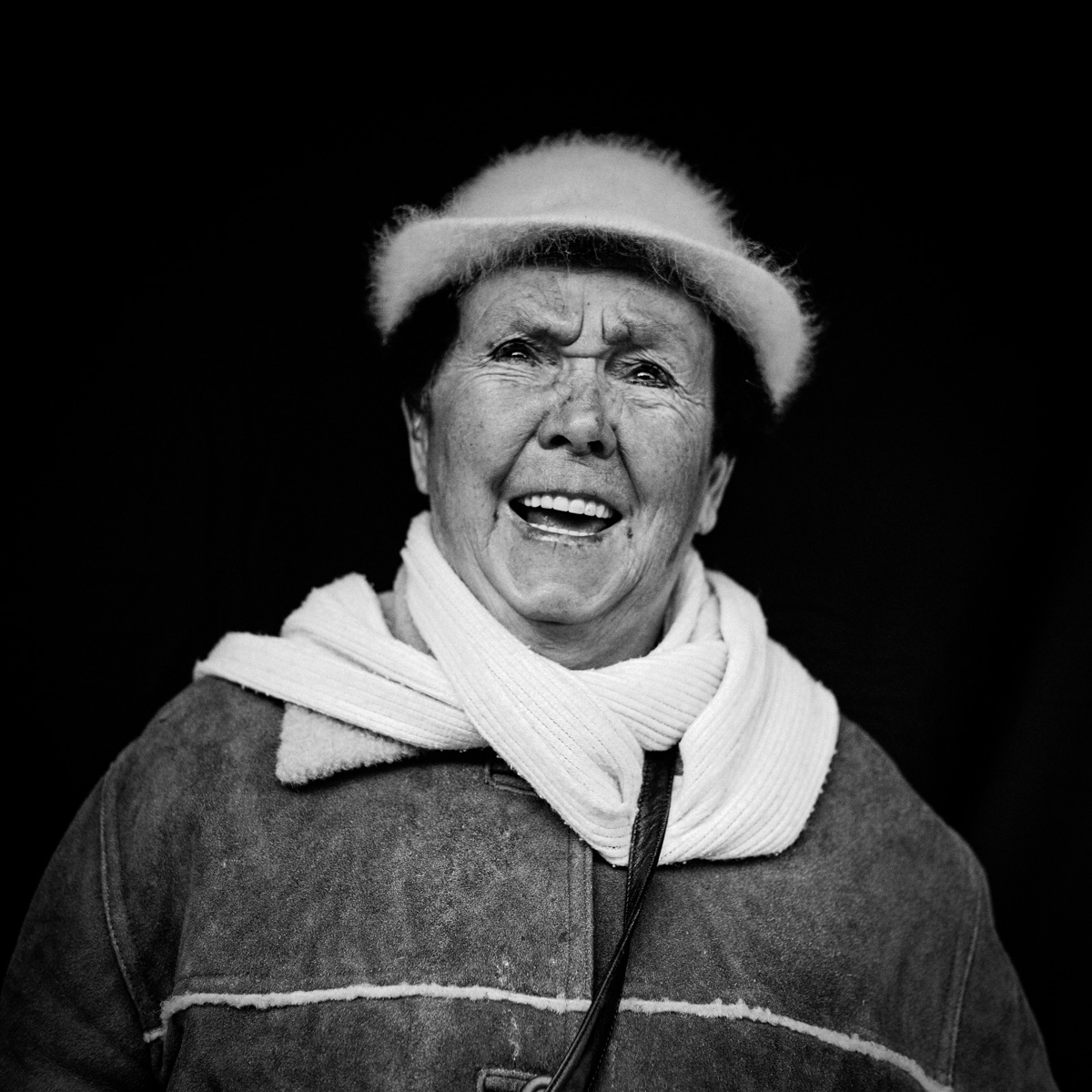 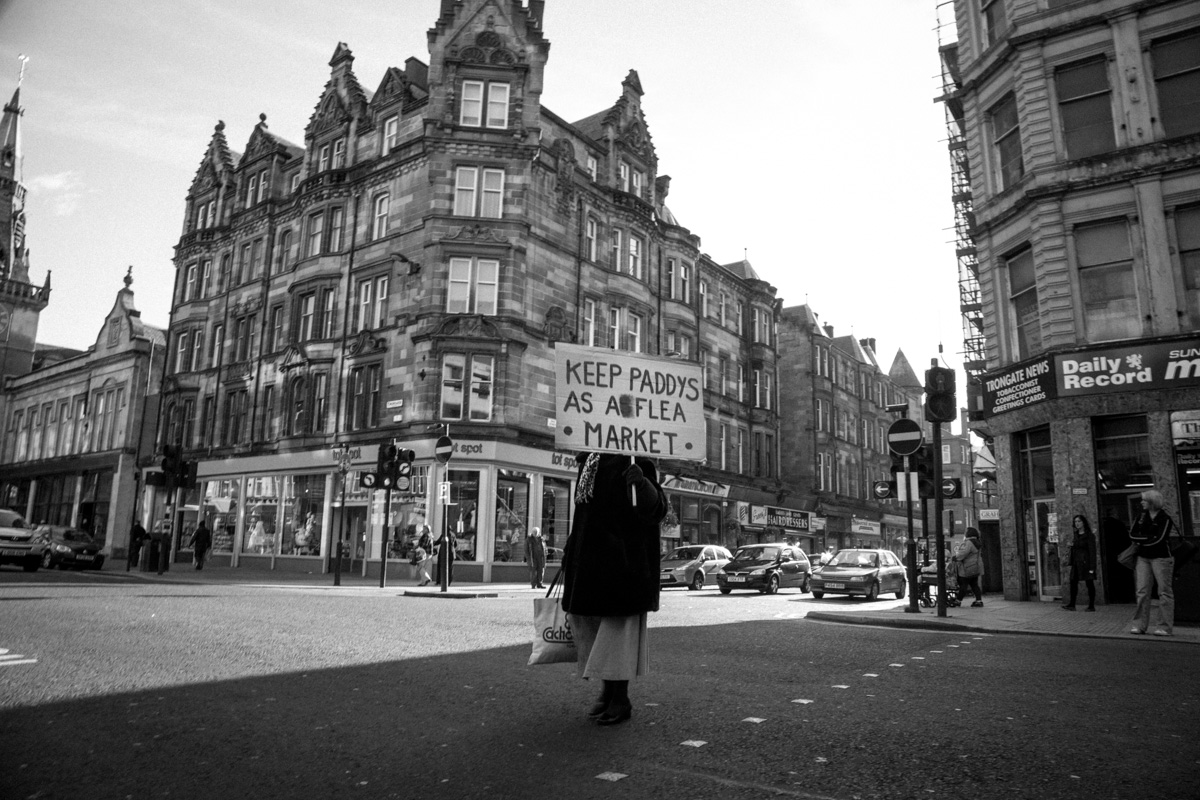 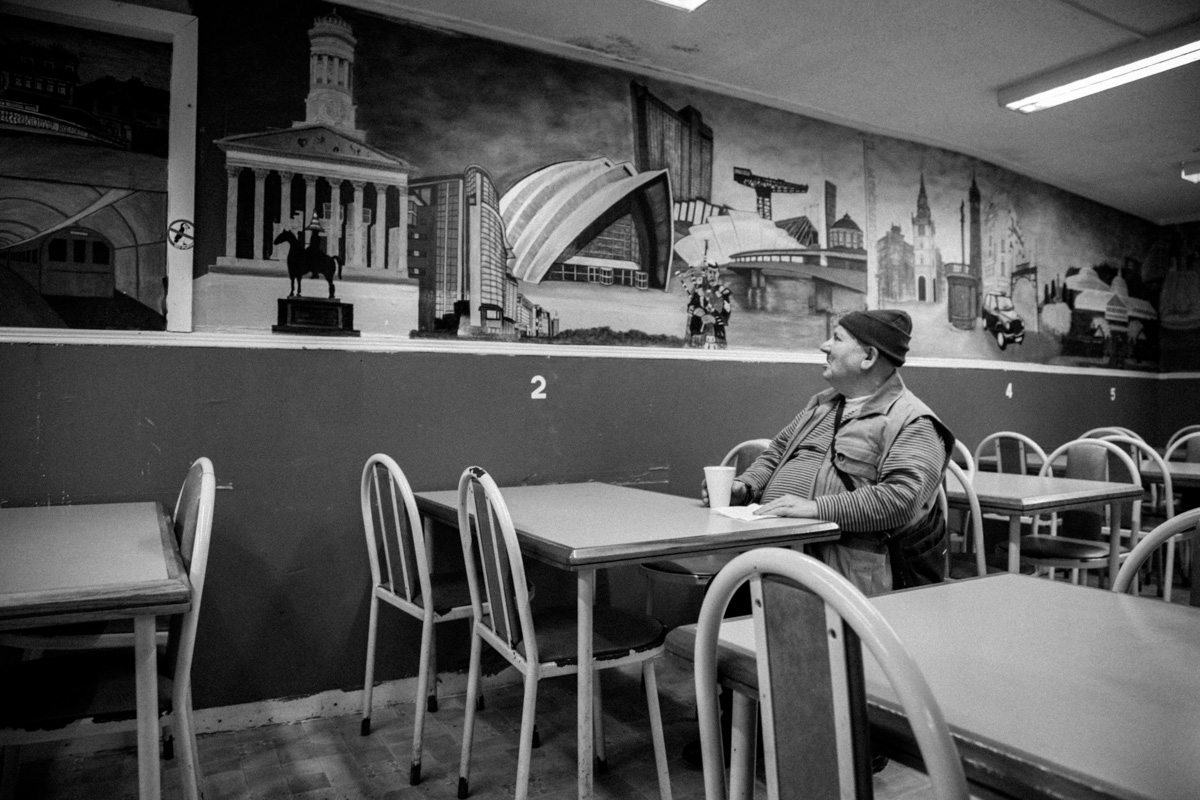 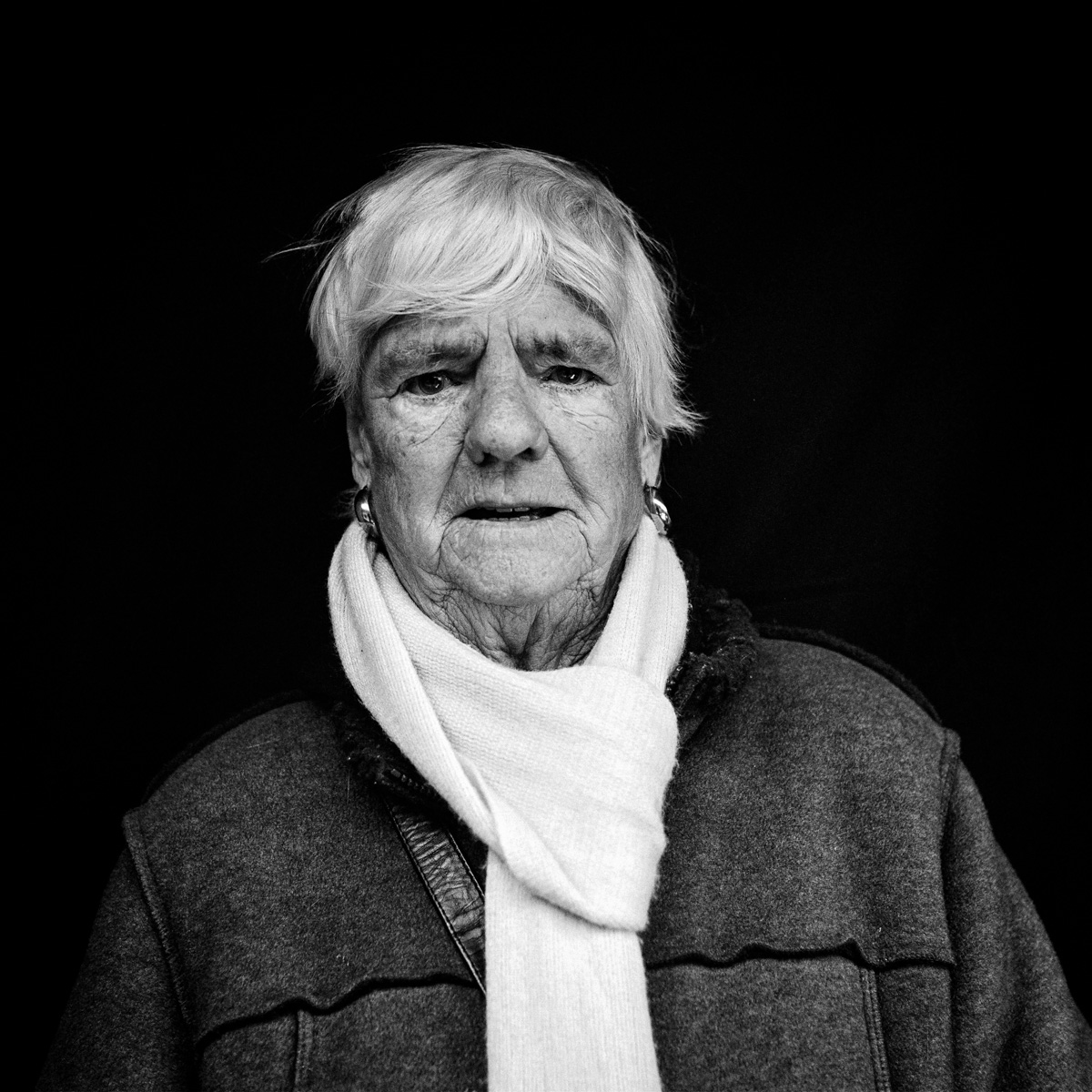 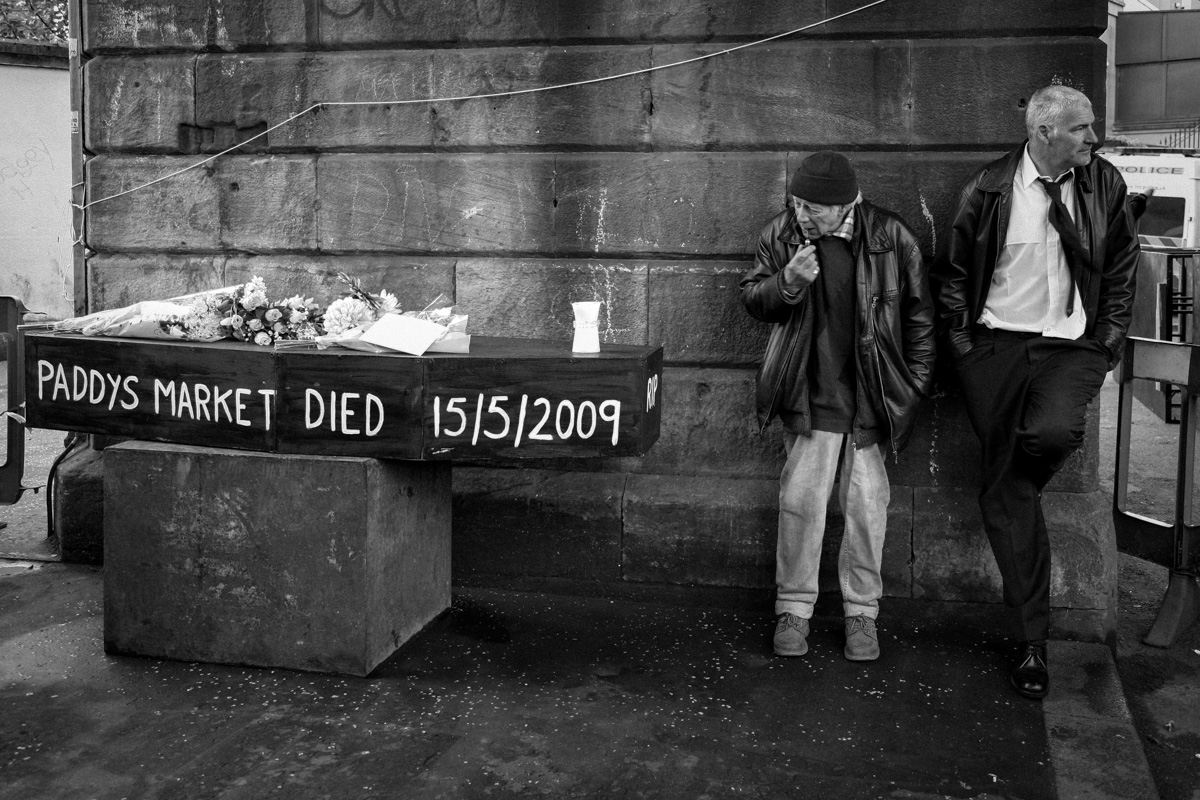 For 18 months I documented Paddy’s Market as its traders and small band of supporters fought a long hard battle against closure and a Glasgow City Council and media PR campaign that was hell bent on its innilation from the City Centre. The council and local media started with a smear campaign – claiming the market belonged to a by-gone-era. It was not part of the trendy bars, bistros and shops of the Merchant city servicing a booming and diverse cultural scene. It had served its purpose in life, was past its best and needed to be regenerated.

Put simply the market just wasn’t fit enough to be considered – ‘Glasgow: Scotland with Style’ – the city councils then infamous streamline. To ‘sell’ the closure of Paddy’s – Glasgow was promised a ‘vibrant new Camden Market’ style market in its place. A utopian vision of new ethnic art stalls, second hand goods and antiques serving both the poor of the city and the middle classes. Traders at the market would be invited to apply for a new license to operate in this new ‘upmarket’ market and Glasgow could claim yet another shopping paradise to its list.

Of course, in the end, no such market ever materialised and there was never any plans either. When Glasgow was then awarded the title of being the host city of the Commonwealth Games in 2014 (which back then seemed a long way off) the campaign to close the market then upped a gear focusing on the high levels of crime on the area.

Newspaper headlines about Paddy’s being a drug-dealing haven, with prostitution, violence and even an attempted murder were widely reported. But no-one seemed to point out the small print that all these crimes were committed after, not during the market when at 2pm every day the market packed up and then became a public lane next to a Homeless Hostel for drug addicts. In minutes obtained under the Freedom Of Information Act, Strathclyde Police themselves stressed in April 2008 that it was not the traders of the Paddy’s Market who were the cause of the crime in the area. Chief inspector Alan Spence stated crime was down to “the people that the area generally attracts” and noted Hope House (the Homeless hostel) as being “a major crime generator”. However, the chief inspector insisted if Shipbank Lane, the site of Paddy’s Market, were to be closed it would have a “huge positive impact on the level of crime being committed in the area”.

It was easy to see that Paddy’s Market and the traders were being used as a scapegoat for crime but and no-one from the City Council was going to argue against closure and the local news headlines had done their job in convincing most Glaswegians that it was games-a-bogie. The nails in the coffin were being hammered in tight, and not even a TV appearance and appeal to save the market by Alex Kapranos from Franz Ferdinand would make any difference now.

FIVE YEARS AFTER ITS CLOSURE AND THE PADDY’S MARKET SITE IN SHIPBANK LANE REMAINS A FENCED OFF GHOST TOWN. COUNCIL PLANS AND HYPE ABOUT REGENERATING THE MARKET INTO A ‘MODERN VIBRANT CAMDEN’ STYLE MARKET NEVER MATERIALISED. JOBS AND LIVELIHOODS WERE LOST.

The traders fought on with their dwindling campaign, marching too and from the City Chambers in the cold winter mornings as the close of the market became more and more inevitable. On the 15th May 2009 the police moved in at 6am to seal the area and building contractors arrived shortly after to install large steel fences. Paddy’s Market was no more.

Five years after its closure and the Paddy’s Market site in Shipbank Lane remains a fenced off ghost town. Council plans and hype about regenerating the market into a ‘modern vibrant Camden’ style market never materialised. Jobs and livelihoods were lost. Traders tried to set up business elsewhere, some setting up in the Barras Market but the reality of only being able to trade for 2 days per week as supposed to 6 days meant many joined Glasgow’s fast-growing unemployment queues. And the Barras Market itself was already facing its decline of customers and support.

The council have claimed there has been a reduction in crime around the market area but that could possibly be contributed to the fact that the Homeless Hostel next to Paddy’s was closed in 2011. And even with that there is no evidence to back any decrease in levels of crime in the area. There were of course elements of counterfeit and contraband in Paddy’s Market by a few people but the vast majority of traders had no part in this but were tarnished with the same brush. The traders had always continually argued to ‘manage the market not massacre it.’

So now we are in 2014 and only weeks away from the Commonwealth Games and the bus loads of tourists and athletes who will be whisked through Glasgow. Routes into the East End of the city are being tarted up, shop fronts given a lick of paint and advertising boards put up with the latter isn’t possible. The great Glasgow makeover/disguise has began in earnest and the last remnants of Paddy’s Market is yet again in the firing line.

A small group of traders who survived the first closure in 2009 (as they operated outside of Shipbank Lane on the Bridgegate) have just been given their instructions to leave the area. As one trader explained – “I waited here for 5 years with the promise of a new market, a second hand goods and antique quarter for Glasgow. But there has been nothing.”

The cost for having Paddy’s Market lying empty for 5 years has been £500,000 in rent that the City Council (tax payers) has paid to Network Rail – owners of the Paddy’s Market site. Maybe if we had the new strapline in place in 2009 – ‘People Make Glasgow’ – then Paddy’s Market could have survived in some way. We can only hope those being bussed through Glasgow think the view from the window is worth seeing.