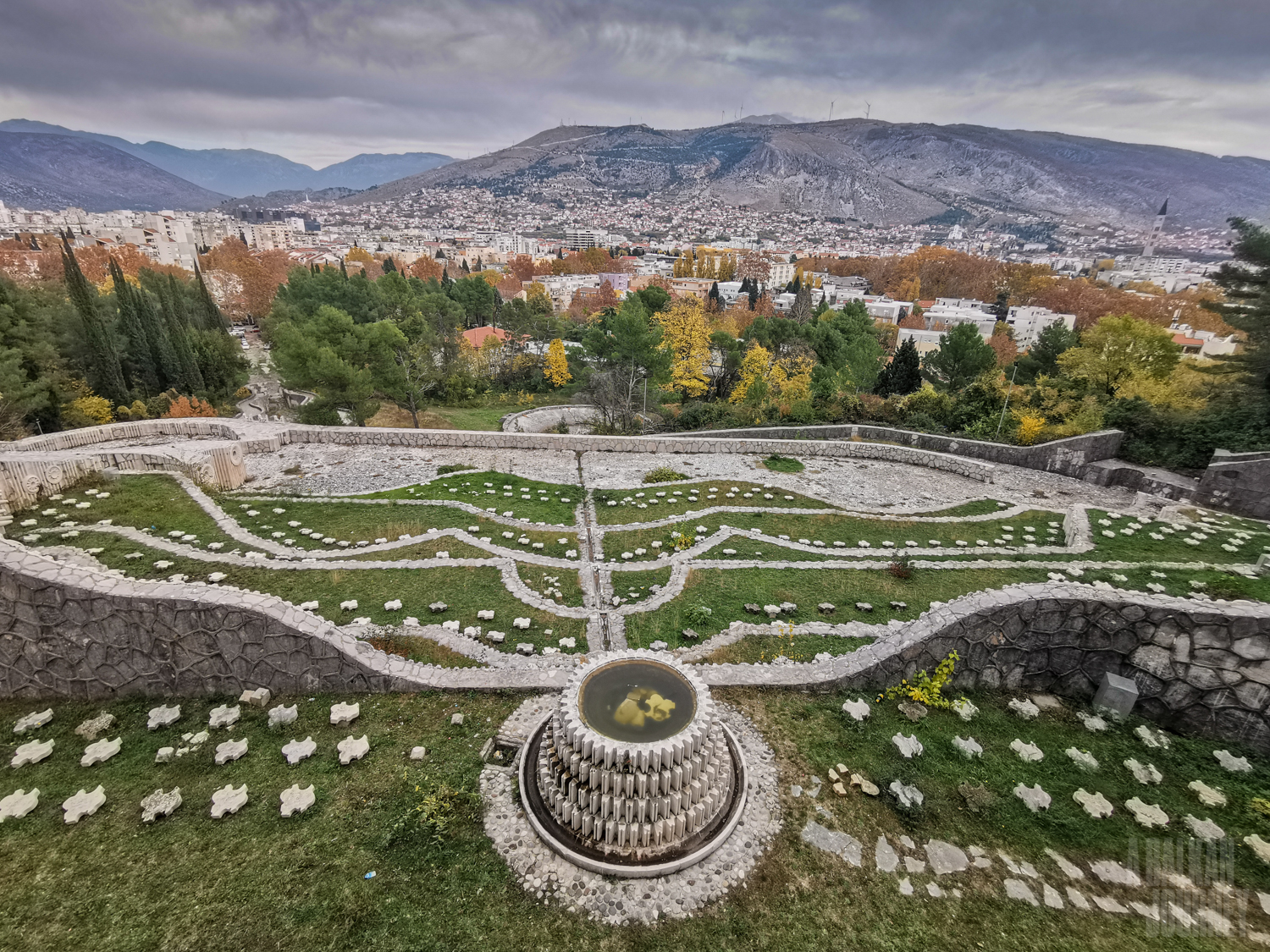 Of all the Stag weekends, in all the towns in all the world, I held mine in Sarajevo and Mostar. Accompanied by ten Bosnia and Hercegovina virgins, I made the effort to make it a memorable trip – a baptism of beer, and culture. Sightseeing. More beer. A shot in the arm antidote to those ‘traditional’ stag locations. You know the ones. Yet my memories are naturally hazy, fuzzed by a 15-year hiatus, after all, it was back in 2006.

Subsequent and frequent pilgrimages to Bosnia centred around Sarajevo. A city that captivates and captures, hooking you in for the duration. Ask anyone. Leaving Sarajevo? It’s not a thing. Yet Mostar was always tempting me back and finally, November 2021, the travel Gods, the sun, moon, planets and my diary aligned. A Sarajevo work trip with one free day to explore…

The temptation of Mostar

Despite traveling to Bosnia over the past 25 years I must confess to never having been on a Bosnian train. Ever. Trains in those early, post-war years were non-existent, both country and train lines paralyzed by the war of 1992 – 1995. And so, for once, with a happy heart I leave Sarajevo on the 7.15 am train. Mostar bound for twelve pounds- a joyous two-hour trip on a fare that pays homage to the glory days of state-owned railways.

Slugging through smog-filled Sarajevo, it’s a slow start. The train persists and it isn’t long before we slough off the grey bleakness and tunnel under the mountains of Maglić and Zelengora. The landscape rolls, the weather shifts – even the air changes, whispering the promise of a different world. An hour later than scheduled (in classic Balkan fashion) the train pulls into Mostar.  It’s like being dropped into the midst of an exotic Middle Eastern-inspired panorama. A promise delivered.

With < six hours before my last train to Sarajevo departs, it seems apt to start my photo journey at Stari Most. This is the old town, framed by the rebuilt 16th-century Ottoman bridge synonymous with Mostar and its identity.

Mostar is the bucket-list town for every visitor to Bosnia and Herzegovina ever. But few tourists tramping these cobblestones would know that this is a city divided. Mostar is the only city in Europe where no local elections have been held for over a decade. It remains split between Muslim Bosniaks and Catholic Croats, broken by those who fought fiercely for control over the city during the country’s war.

The two dominant political parties seldom agree on anything, a discord that extends to organising elections.  When elections were finally held this year, the usual depressing narrative prevailed. The same two parties that have fissured the country continue to dominate, causing conflict in other means.

November is off-peak season and that, coupled with the legacy of post Covid Lockdown, means there are no more than a handful of tourists in the old town. A comforting clutch of fellow travelphiles to continually bump into as I explore.

I leave the old town and bridge, crossing into the Croatian side of town. I photograph the numerous pillars of defiance, broken buildings cloaked in a uniform of leaves, colour and Autumn light. It’s almost 30 years since their attack. Mostar, unfortunately, is the city that suffered the most physical and architectural damage during the Bosnian war. The city bears visible scars. I could have spent all day photographing these relics to destruction, but time was short and The Partisan Memorial Cemetery, my next stop, deserved time.

The entrance to The Partisan Memorial Cemetery is now a make-shift car park. Without Google Maps I’d have struggled to find it.  The Partisan Memorial Cemetery is spectacular to behold – a complex architectural, aesthetic, and landscape design that stands like a silent guardian, overlooking the city. There is nothing like it anywhere in the world.

Designed by architect Bogdan Bogdanović to honour Yugoslav Partisans killed during World War II, it was officially opened by Tito in 1965. Because of the importance and significance of Mostar as an anti-fascist stronghold and seat of resistance, the Yugoslav government wanted a monument befitting to those soldiers.

The cemetery was the physical manifestation of a desire to create a common Mostar history. A shrine to the sacrifices made by the partisan forces who fought together despite the ethnic diversity. A riddle of 630 abstract monolith markers lament the multi-ethnic army that fought and died together for a common cause, stones etched with names belonging to Serbs, Croats, Bosniaks, and Jews.

Designed to be more than a simple cemetery, this is a necropolis -a city of the dead where death doesn’t discriminate. I’m told that water from the cemetery well used to flow down to the bottom of the monument, weeping along the complex’s trajectory, leaving its tear tracks and serving a poignant reminder to the living.

Today the well is drained and dry. It too has fallen victim to neglect and vandalism. A breathtaking reminder of the short-lived proclamations that this complex would be a treasured, protected national monument. Another promise broken.

The citizens of Mostar are less sentimental about the cemetery, perhaps believing that the restoration of the Old Bridge is sufficient appeasement for tourists. War is a painful reminder these days and in this decaying edifice other tourists are notably absent. In the silence I whiled away hours, the click and whirr of my trigger-happy shutter finger only distracted by the waning light and the ticking clock.

I force myself to leave this stony outpost for a further wee wander around. The cities architecture is a photography project in its own right. A heavy eclectic mix of Ottoman, Austro-Hungarian buildings are pitted against modern socialist buildings-made more surreal because much of the fabric of these towering remnants are destroyed.

The ‘Razvitalk’ former shopping centre and now makeshift car park surely takes the grand prize for uniqueness. Its exterior concrete façade is decorated with motifs from stećak – gravestone monuments from the medieval period in Bosnia.

The former Ljubljanska Bank, more commonly known as ‘Sniper Tower’ was the tallest building in the city at the time of the war, an imposing obelisk over Croat-held territory. With panoramic city views, the war-torn bank was a sought-after vantage point for the Croat snipers. Today, despite being fenced off, it’s somehow still accessible. No longer a window to panorama, it exists as a graffiti hub and shoot-up den. If I’d longer than 6 hours to spend I would have definitely found my way in. Maybe next time.

In the city’s main park, a statue stands proud. For all the haphazard randomness I’ve come to expect from Mostar, this never fails to surprise. Proudly emerging from the verdant park is a bronze paeon to Bruce Lee. It is quite the juxtaposition. Created by sculptor Ivan Fijolic and partly funded by the German government the statue was meant to be a symbol of solidarity. Because everyone loves Bruce Lee, a universal panacea for this ethnically divided city. A beacon of strength and unity, paying scant regard to the constructs of Croatian, Bosniak, or Serbian identities.

Before the unveiling in 2005, Croat and Bosniak leaders complained that the Bruce Lee statue was a “provocation” because of his aggressive martial arts pose. To alleviate these concerns the statue was repositioned to face a neutral North; poetically avoiding ‘conflict’ with the eastern Muslim side or the western Croat side.

By 3.30pm with light dwindling and my thirst rising, I ventured through a corner lane off Marshal Tito Street aiming to find a bar. Apart from the ‘Red Army’ slogan and a lone dog playing hide and seek with a crouching boy in the doorway, there was no visible indicators that I was indeed outside the doorway to a hidden bar. A bar, humbly apologetic for existing.

Immediately, on entry, I realised that this wasn’t the usual tourist hangout. Undeterred, I bravely ordered a glass of rakija and a beer with my pitiful grasp of the Bosnian language. I felt like the star actor in the cliché ‘outsider enters saloon scene’ from cowboy films of old. But as I took my seat in the corner, the barman explained that my drinks were being paid for by the guy at the bar. He introduced himself as Goran. Panic levels abated. I knew all would be well and that I would get out alive, if not fully sober.

4 rajika’s and 3 beers later the conversation was flowing, a broken hybrid of Bosnian and English sufficient to fuel conversations and questions about whether I was ‘Glasgow Celtic or Glasgow Rangers’ to ‘Is there gonnae be another war here?”

In the past month, sadly the rhetoric of a war returning to Bosnia has taken on new and sudden seriousness. The ultra-nationalist Bosnian Serb leader Mirolad Dodik has announced plans to withdraw the Serb-dominated Republika Srpska, one of the country’s two administrative entities, from major state institutions, and to form his own army. This time, he has the backing of Russia. It has set alarms bells ringing across the region and beyond but for the people of Bosnia and Hercegovina the daily struggles of life continue.

In the 92-95 war Goran and the others would have been on the frontline defending their own and their city’s survival – they had something worth fighting for. No-one has the energy for war or can even think about who would actually fight.

As I looked around the bar and admired the many framed photos of Tito, Goran took me to a ‘secret’ room in the back of the pub. It was a vault filled with even more memorabilia, books and photos of Tito. A memorial to past times and a meeting room where the men would meet monthly to discuss, commemorate and idolise Tito and the merry days of Socialism. A world that now seemed a million miles away from modern day Mostar in 2021.

Their generosity of spirit coupled with the plentiful beers and rajika, made me feel right at home. I could have easily stayed in the Red Army’s Old Men’s Club all evening, but on realising that I only had 10 minutes to catch the last train to Sarajevo I quickly said my final goodbyes, fumbling on to the backstreets and into Google Maps to get my directions.

The sun set at 4.30, with the incumbent gloaming marking the end of my trip. The Winter nights had snuck in cloaking the town in darkness. With no light left to capture the land, I settled into my rakija induced buzz and reflected on the past six hours. I made peace with my inability to capture all of Mostar in one day and acknowledged that I had managed to capture something – the essence of Mostar, the resilience of both the city and its people. And I realised, that of all the journeys in all the world, my Balkan journey might just continue for another 25 years.