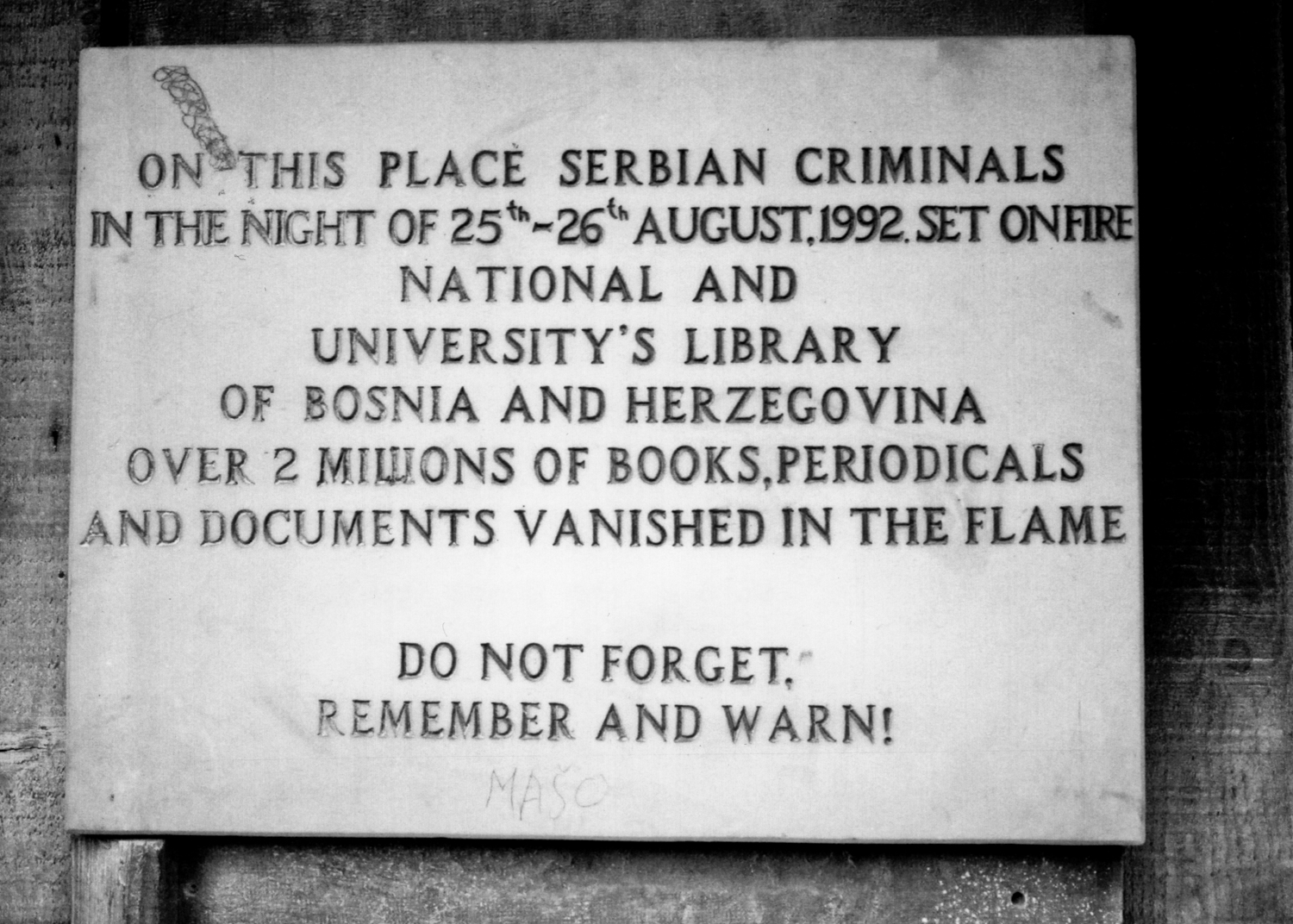 DO NOT FORGET – REMEMBER AND WARN!

30 years on from the burning of Sarajevo National Library

“Black snow fell over Sarajevo, darkening the midday sky with ashes from the million and a half books burning in what was once the National library.”

It was on my very first visit to Sarajevo in August 1996 that I first photographed the burned-out shell that was the National Library (Vijećnica). I shot 4 or 5 frames in BW of a ravaged building, that was unrecognisable as a library or anything else.

4 years before on the 25th August of 1992 it was deliberately shelled over 2 days and burned spilling out smoke, ash, and fragments of pages across the city. Millions of books and countless historical artifacts were destroyed and all that survived were its walls and pillars. Stored treasures that had been a testimony to Bosnia’s centuries-old history and its identity as a multicultural society.  A new word was created to describe the tragedy: ‘culturcide’.

A campaign began to rebuild the National Library, a campaign that would take a long and difficult road. I visited again several times over the past 20 years to witness its rebirth and in May 2014 it was finally reopened to the city and to the world. It was no coincidence that the official opening took place on May 9, 2014, the same day that Europe Day and the Day of Victory over Fascism are observed.

Today it serves as the current seat and headquarters of the Mayor of Sarajevo, as well as the Sarajevo City Council. The reconstruction of the National Library was synonymous with the long, painstaking and seemingly impossible road to reconstruction all across Bosnia. It was vital for Sarajevo that it came back to life, a city that had lost so much. Today it stands a defiant message to those who choose to deliberately burn books and libraries in conflict.

It may have been thirty years on since the Library burned and the war in Bosnia raged, but Ethno Nationalism is once again on the rise and Bosnians fear war could return. Elsewhere an invasion and bombardment by Russia are destroying much of Ukraine. The cry of Never Again now seems completely redundant as the flames of war are once more ablaze as the victors of Fascism are marching on.

But today Vijećnica stands strong and defiant, a symbol of Sarajevo and for the world, as a beacon in the ongoing fight against Fascism. Bakir Izetbegovic, the then Muslim Bosnia member of Bosnia’s three-man presidency said on the building re-opening :

“This building is triumph of civilisation over barbarism, of light over darkness, of life over death and the triumph of the idea of unity and co-existence over the idea of inhuman and unnatural divisions and clashes.”